Domingo is fairly distinctive as he looks like a ball of fur under a bucket! Get the Domingo Egg from the fake monster in the top right-but-one room (the one above the library) in Manarina and use the incubating device in the item shop at the mid-bottom of the second Pao. Talk to the right-most guy once in the shop. Give the Domingo Egg to someone who doesn’t have much to carry but is likely to stay in the Forward Team (such as Gong).

He is fairly useful because his spells are powerful, but he always seems to get killed first. As he is newly hatched he starts at L1 which is a bit low for this point in the game but he cannot be promoted when he reaches L10 indicating that he already has been – even though he only starts out with Freeze L1. His defense improves later on and his spells are devastating – especially Freeze L3. 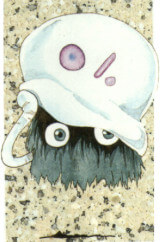 Domingo does not use weapons, since he is a Magical Creature he prefers to use magic. However, he is able to attack using his “arms”.