Gort is an elderly dwarf in your hometown of Guardiana. You’ll first meet him in the little pub to the north-east of the town, where he’ll tell you he used to fight. When you’ve completed the first 2 battles and return to the town, you’ll find there was an attack, which inspires Gort to join the Force.

He’s not quite as strong as Luke, but is an excellent warrior nonetheless. Give him the best axes you can get and he’ll kill most enemies with one hit. Especially good at scoring hits and taking next to no damage from mechanical enemies. 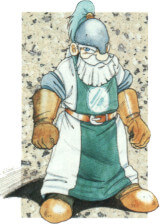