Male human with white eyebrows and beard, green clothing and a tall hat. Torasu joins you with Alef as you leave Prompt in search of the Tower of the Ancients.

He’s a fair healer but Gong and Lowe should be better by now. 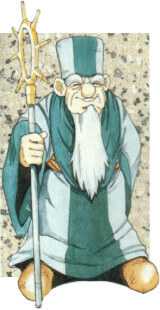