You’ll meet Diane in a house near the top of the mountainside town of Bustoke. She’ll ask to join when you talk to her.

Diane is a good archer with same-level stats better than that of Hans, but if Hans is of a much higher level already he may be the better prospect. Her maximum stats are slightly lower than Hans’, but a little higher than Lyle’s. Her speed increases quickly at first then levels out with a sharp rise at the highest levels. 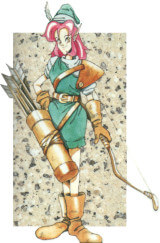