You first meet Amon on the way to Shade Abbey as you travel north from Rindo. She’ll ask you to help Balbaroy, but when you do so, you’ll find it’s a trap and you have to fight a mass of undead soldiers. When you’ve beaten them and Balbaroy has joined the Force, Amon will ask if she can come with you to be with him.

Amon is not as strong as Balbaroy, but with a small amount of work she’ll soon be up to his standard. 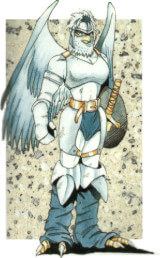