The elven archer, Hans, is one of the orginal members of the Force, who joins right after you’ve seen the King in Guardiana and have gone back into the town. He tells you not to put him in the front line, and take heed of those words, since he’s able to attack from a distance using his bow and arrows.

Hans is very useful in the early stages although at Level 6 Diane’s stats are better than his. Look to Lyle for real power later on. Hans has higher maximum stats than Diane but not as high as Lyle. 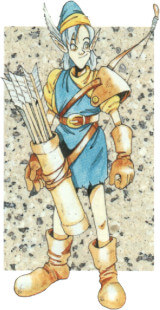