Lowe is a blue-haired halfling male with light brown clothing. It would seem that he’s a close friend of Max.

He joins you when you leave Guardiana castle for the first time after talking to the king. A good healer who learns fast, but can’t fight to save his life! He has higher maximum HP and MP than Khris. 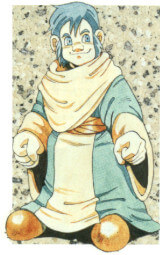