Hanzou the Ninja is found in the town of Runefaust in Chapter 8. In the bushes on the right hand side of the town you’ll see something that looks like a throwing star. Search it and Hanzou will wait for you at HQ.

He at first seems not to be able to hit anything but soon becomes very powerful. His magic spell Desoul kills Blue Dragons instantly and it also works well on Darksol! 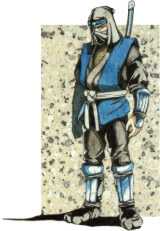