Adam is a guard in Metapha who joins after the fight against Chaos. Although he might not look that powerful, he certainly improves after promotion, becoming one of the most powerful members of the Force. It’s just a shame his movement range is only 4.

At first he has trouble hitting opponents but he’ll build up a high defense rating (second only to Guntz). 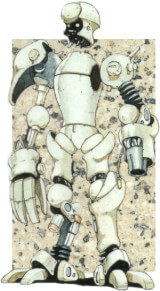 Adam doesn’t use any weapons as such, prefering his built-in robotic weapons.