Jogurt has the appearance of a hamster with a helmet which is too large. Just below and to the right of Gong’s hut is where you first happen upon this strange apparition, talk to him. You may also run into him in Alterone Castle. Later in the first Pao when you enter the temple he appears prone in the top left of your screen. Approach the bed in the corner and he stands up and promptly falls down again. He has now joined the Shining Force!

Jogurt has all the fighting skills of a real hamster. He can never advance past L1 is always available for promotion but can never actually be promoted. You can raise his attack and HP total with Power items or the Bread of Life if you wish. When he kills he gains/loses a Yogurt Ring which will enable anyone to take on Yogurt’s appearance (in their square speech portrait) when worn and (on their combat icon) when used on them. How useful. 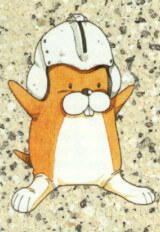 Being a hamster, Jogurt doesn’t seem to have a clue how to fight in battle…