You’ll first meet Kokichi trying out his new flying machine in the mountainside town of Bustoke. If you talk to him he’ll give you a demonstration, and later you’ll find him in Pao, the first time the caravans pack up and go. He’ll only be there if you had the demonstration in Bustoke. 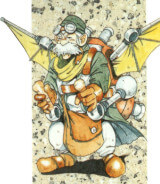