Ken is one of the original members of the Force, who joins right after you’ve seen the King and have gone back into the town

Ken builds up well at the same rate that the monsters get harder until the bridge at Bustoke when he seems to lose it for a few fights later recovering. This is about where he’s available for promotion which weakens him at first. He has the second-highest maximum stats of the knights making big gains at the highest levels. 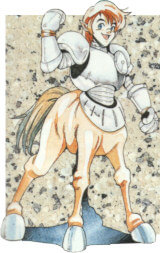