You first meet Balbaroy inside the chapel at Shade Abbey, but when you try to help him, you’ll find it’s a trap and you have to fight a mass of undead soldiers. When you’ve beaten them Balbaroy asks to join the Force.

His stats usually are a little better than Amon’s, making him a more likely candidate for your fighting team as opposed to Amon. 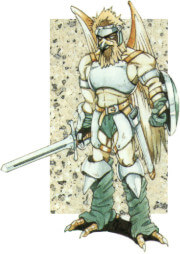