Find her in the mage school at Manarina and tell her of her father’s death. Then find her upstairs (right & up). Anri’s ‘alternative’ clothing can be found at the Laser Eye battle on Bustoke bridge. Stand one square to the left and one square down from the left-most Dark Elf sniper face up and search. You will find a ‘Haute Couture’ (called the “Kitui Huku” in the US and Japanese versions) which Anri’s combat icon only will wear whenever it is in her possession. This must be found during the fight as there is no opportunity once the Silver Knight is dead. 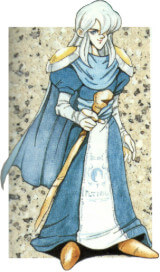