You first meet Arthur in the mage school, Manarina. He’ll tell you that he’s happy where he is, but if you go back to him after you’ve spoken to the Spirit of the Holy Spring he’ll join you. Because he spent so much time at Manarina, he learned some magic too, which makes him a very useful knight.

His initial stats are usually quite low, so he’ll take a bit of building up, but after that he’s a real asset to the team. He has the highest maximum stats of the knights all of which only go up significantly at the very highest levels. 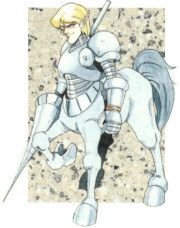