You’ll first meet Guntz in the town of Rindo, trying out a special steam suit for a local inventor. You’ll meet him again in the sheep pen at the second Pao, where he’ll join your Force.

Although the Japanese game manual lists him as an Arumajiro (Armadillo), it has a question mark beside it, perhaps he’s something else? 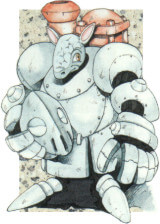